Ok, so a few weeks ago I told y’all about Tyler and I’s trip to Comfort where I became o-b-s-e-s-s-e-d with their chile infused vinegar. So of course I ran home and decided I must recreate that dag on stuff! And now I get to share it with you! 🙂 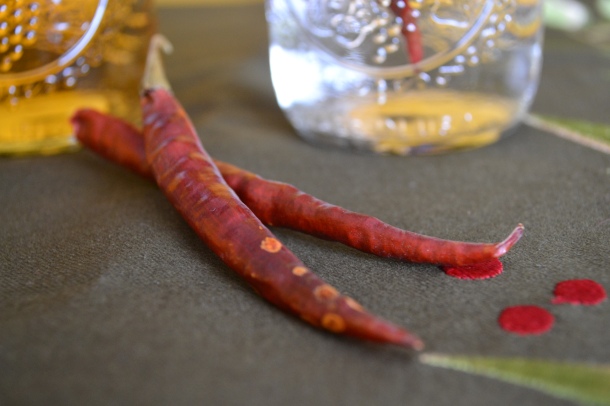 I actually ordered dried chile’s off of Amazon because I could only find jalapenos in the grocery store. I was a little apprehensive at first but they re-hydrated perfectly in the vinegar. The tricky thing here is you have to set it and forget it. Not to be confused with the product on the infomercial.

While we were in Comfort I asked the waitress what type of vinegar they used (already figuring out how I could make it at home) and she told me she thought it was cider vinegar. After some research, I saw a few recipes that called for white vinegar so I gave it a try with both to be able to compare and contrast.

I used small Ball jars but I’d suggest larger ones if you have them. Might as well make more while you’re at it!

Here they are on day one: 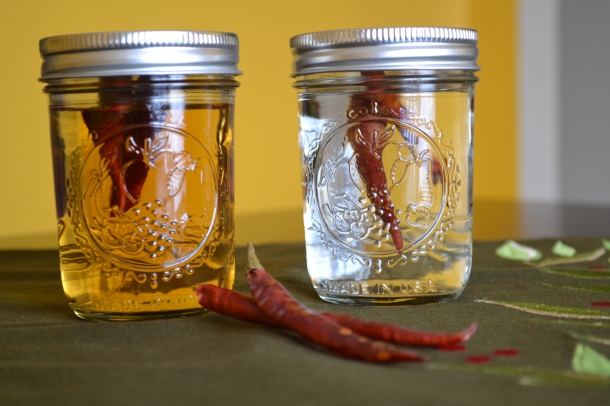 You can clearly tell which is cider or white vinegar at this stage. But if you notice, the white vinegar automatically started activating the infusion process (I think I used that correctly?) immediately.

See how its turning white and bubbling? It was busy making magic happen people!

Now on day 3, you can see that the white vinegar has actually changed colors as the chiles have re-hydrated. This whole process was kind of like a science experiment and was pretty cool if I do say so.

All of the recipes I saw said you needed to allow the vinegar and chiles to incorporate for about a week. I’m terribly impatient but I knew I wanted this to turn out right so I did as I was told. Of course, I opened it frequently to see if I could notice a difference and you really can tell that it smells spicy. Kinda cool.

Now all I need is some BBQ to put it on! 🙂 Or vegetables. Or mac and cheese. Or anything really. Stay tuned!